The Golden Gods show was freaking amazing! I threw up rainbows and small puppies and kittens! As promised, I did take some pictures but as I also mentioned they may not be the best. I tried taking some non sucky shots of Stone Sour and my brother took some of In This Moment. You had to be sitting where we were to really appreciate how close we were.  Normally, we would be sitting stupid far where we would be lucky to see the performer’s mouths moving but not this time! The Wellmont Theatre is pretty small so it worked out.

Let’s start off with the first band, Hell Or Highwater. They performed a few songs knowing damn well not many people had heard of them. The only two songs that my brother and I enjoyed were “Gimme Love” and “Hail Mary” from their album Begin Again. They did perform other songs but to be honest, to me, it was kind of lame. A+ for effort though! The rest of their set didn’t speak to me but front man, Brandon Saller, really did know how to get the crowd going. During one of their songs, Brandon went into the crowd and really got people pumped.

I think what didn’t match up was the drumming. Don’t get me wrong, Caption Carl, their drummer, was pretty awesome but it didn’t match with the music they were playing. It sounded a little power metal, half punk pop, rock… metal… pop… EYE-DEE-KAY! (IDK) It just sounded too messy for my liking. It was just everywhere!

In This Moment came up next. They performed old material like “The Gun Show” and new ones such as “Whore”, “Blood”, and “Adrenalize” from their new album Blood.Their set was the most theatrical of the three performances. I am convinced I will always be a fan of theirs. Not only is the front woman, Maria Brink, just drop dead gorgeous with big boobies (they totally are. Go ahead, Google Maria Brink, don’t worry, I’ll wait.) her performances are just backed up with such passion and angst that you cannot ignore her. The only complaint I had with her was her hair. Dude, seriously, what was up with your hair, girl? The entire, and I mean, the ENTIRE, time she was on stage she had to adjust her hair. Not that she was wearing a piece or anything but she kept messing with it. The props she had on her sides were blowing air and her hair everywhere and while she was singing she had to keep pushing her hair down to the front of her chest… I wonder what she was hiding! 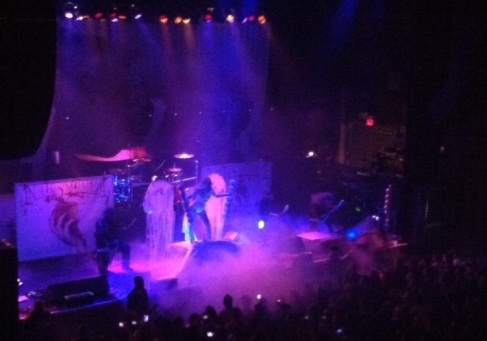 I loved all the songs she performed. The most theatrical performances I have seen thus far are In This Moment and Rob Zombie. Of course, Zombie does kick In This Moment’s ass in that department, sorry guys! HUGS?!

Stone Sour was the big sha-bang! They opened up with their singles “Gone Sovereign” and “Absolute Zero” from their album House of Gold & Bones, PT 1. I don’t really have any complaints. Not only did they perform new material, they also charmed us with old school “Bother” where the lights illuminated front man Corey Taylor in the most intimate setting. Corey let the sea of fans before him finish off the last verse of the song. It was EPIC! 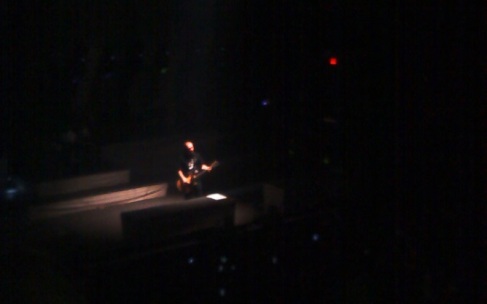 So there you have it! With pix! The concert was not too shabby. Then again, I was pretty intoxicated so I may have just imagined this whole thing 🙂 Stone Sour’s latest album House of Gold & Bones, PT 2 dropped yesterday, so fucking get it. For every minute you waste God kills a baby bunny. No… don’t kill the bunnies… they are so fluffy and cute!