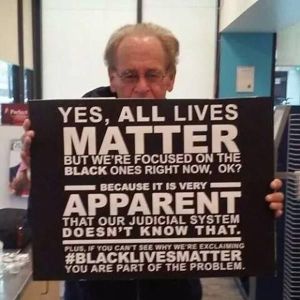 “But we’re focused on the black ones right now,” Is there a sign that replaces the word “black” with “Latino”? Why not? We matter, too. Why aren’t there riots and protests happening for us? Why is the news only showing black lives being slain? Where were the riots for Antonio Zambrano-Montes? Aside from him throwing rocks, he still had his hands up and was killed by police. What his crime was is irrelevant. The point I am trying to make is that no protests were done. In the link to the article I provided, there is one part that reads, “Violence or discrimination against Latinos does not tend to resonate among most Americans because Latinos are generally not perceived as Americans but recent immigrants or foreigners…” Ouch. That really, really sucks. So, regardless if we are legal here, we are still just seen as foreigners.

While I was in the middle of being offended by this, I read a comment on Facebook that read, “If you’re not black, you will never understand our struggle.” That literally drove me through the roof. The person who wrote it was black and I completely understood his argument. He was defending his race and I was behind his points… until he wrote that and he was saying it to a white person. Because he was white he never had a struggle with discrimination? You’re telling me he was never discriminated against? 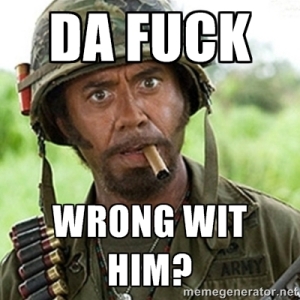 Some black people get outraged because they feel the moment they step into a white neighborhood, all eyes are on them. It is the same feeling some white people get when they step into a black neighborhood. Again, I’m going to throw down my race card. Many people can riot and protest but don’t you dare say, “You’re not black so you’ll never understand our struggle,” when you have the right to do so whereas most Hispanics who came here illegally, trying to improve their lives, can’t do the same. Don’t get me wrong, there are some Hispanics without papers who try to protest but they run the risk of being deported. Along with that, those who may want to protest to defend their loved ones who are illegal, can be targeted.

The whole double standard is fucked up. I started this post two days ago but needed to walk away because I was literally punching my keyboard. It pisses me off whenever any race says, “It’s easy to be you because you’re [insert race].” Every race has their struggles AND every race has their perks. If you’re black or Latino, guess what? There are colleges who offer scholarships just for being black or Latino. Those colleges thrive on diversities and encourage urban students to apply. In fact, those scholarships specifically ask for Latino and black. There are no scholarships that say WHITE SCHOLARSHIPS. On that point, why are there websites called, “MiGente” for Latinos and “BlackPeopleMeet.com”? Am I the only one who is offended by these? If there were sites called “MyWhitePeople” or “WhitePeopleMeet.com” I think they would end up on the news for offended minorities! Keep in mind, I’M LATINA. It’s not easy being any race because there is always someone else who is going to be a dick and blame someone else. 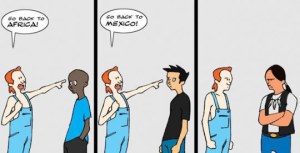 Latinos have a shitty card, too. We don’t have much of a voice to stand for basic human rights, especially if you’re not legal. You get dealt the shittiest stereotypes regardless how hard you work.

All I’m saying is every race has their fuck ups. Do you want to live up to stereotypes or do you want to rise above them? Before you start bashing other races, remember someone else has it worse. The black community wants to protest because they are treated poorly by cops. Imagine how much worse Latinos without papers get treated and they can’t complain. Sit down and watch the movie A Day Without a Mexican. I hope, despite whatever race you are, you can understand my frustration. You are worth being treated more than just a color and you are entitled to exercise your rights as human beings but don’t do them in destructive ways that encourages negative stereotypes. Don’t take your rights for granted because my family just got theirs last year.

2 replies to Latino Lives Matter, Too!