The first week of June was rough, to say the least. D and I had gotten into our first argument over simply missing each other. The time difference was starting to set in and the reality of our situation was becoming immensely clear. My emotions were running high and whether it was my body flushing itself out from the birth control pills or getting hit hard by the military reality that is so true and real for all other branches, and it was incredibly painful.

The time difference is torturous. He’s finishing up work while I’m just waking up. By the time my day gets started, he’s on his way to sleep. I don’t sleep well at night so I stay up long enough to get one hour with him through WhatsApp when he wakes up. Those convos are normally the shortest. Sometimes, the conversation have a stand still and we haven’t been able to video chat as much as I had hoped. Thankfuly, I have friends in the service who have been where he is and explain to me that he is not ignoring me but just busy doing A,B,C. It helps but it doesnt make me feel better.

June – 2 months down
One afternoon I had picked up my mom from the train stop and the moment I parked my car, I just let out a huge sigh that came accompanied with unccontroable tears. Who remembers the Labyrinth Zone (any water level, TBH) from Sonic the Hedgehog? That level was always dripping with stress all because of that reminder tune. That “you are running out of air” tune which, in turn, causes you to panic, make mistakes, and then drown. That was the panicked feeling I had.

I remember breaking down and succumbing to this terrible low feeling.  Mom helped calm me down and made me focus on why we are doing this and why he chose to deploy. No selfish reasons. He did it for his tiny family. She also recommended to enjoy the time I do have here after missing so much. This felt like a perfect time to go see my brother and SIL and spend time with my nephew.

That weekend, I decided to baby sit Damian while my brother and his wife did date night on Friday. Baby sitting went a lot smoother than I expected. I have come a long way from refusing to hold my nephew until his neck was formed! I stayed there from Thursday through Saturday and it was refreshing to be in a different setting but still be around family. By the time I got back home, my household was getting ready for Father’s Day.

My father has never been one to request or expect any material items for any special occaasion that focuses on him; Father’s Day was no exception. Despite not being around often, I do make an attempt to send him a card and I make sure to vomit my feelings in the card to remind him that I do love and appreciate him. Along with my chicken scratch that expressed my love, I decided to up the emotions and attach our very first selfie together where we both looked dapper. This picture meant a lot to me because it was just the two of us. It was ginuine shot. My dad passed his curly hair on to me and for years I would hide it by straightening it. I just started to wear it natural and that is one of the reasons I love this picture of us. If nothing at all, I will always have a part of him, in my blood, that I can always show off. 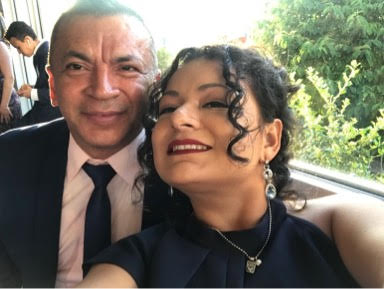 Finally, I finished off the month by going down the shore with one of my girls, Joy, to watch the Joisey Devils. It was quite possibly the best night of the month. I have to admit, I was thoroughly surprised how willing she was to go see a band she had never heard of before but it did warm my heart to see how open minded she was – about everything (cue the dirty thoughts). Amazing company aside, the band was pretty great, espeically the guitarist, however, that opinin may be biast since I know him. I stand by my statement. Carlos, the guitarist could not be ignored. His riffs were more than enough to grab your attention and keep it. He brought so much life to the stage as he effortlessly performed songs as if he wrote the melodies himself. The music just poured out of him and into the audience. The way I see it, if Joy was able to enjoy the show enough to willingly stay for the end of the set, the music was pretty rad.

So, what now?
I found myself questioning the direction in which my life is heading towards. When we packed up to leave the island, I had envivioned all these plans I wanted to execute. To date, none of those plans have been accomplished. My parents, as grateful as I am for their never ending support, have also tried to cushion my fall – too much. To them, I am still their little girl who needs to be protected. They still try to shelter me but I have become more vocal about that issue. I have had to explain to them, although I will always be their daughter, I am still my own person. If my original plans have fallen through, I need to experience that to allow myself to grow and be open to more experiences – good and bad. If I can’t find the specific job I want, then I will do the next best thing a child free adult can do: travel. It’s been hard to pull myself out of this hole that I, myself dug, but I know if I don’t shape up, I will create my own demise. So, with that being said, I need to create my own happiness.

2 replies to While He’s Deployed: 2mo.